David Mills: [00:00:00] So it's now standard practice. Everyone expects that a, that companies, corporations are going to, um, contribute back to society, but there's another level of impact for companies that are connected to a cause that's really compelling and that they're committed to. So here's a definition.

A double bottom line company is one for which lasting impact is as important as profit and for which they have made meaningful investments and they have ways to measure the impact. 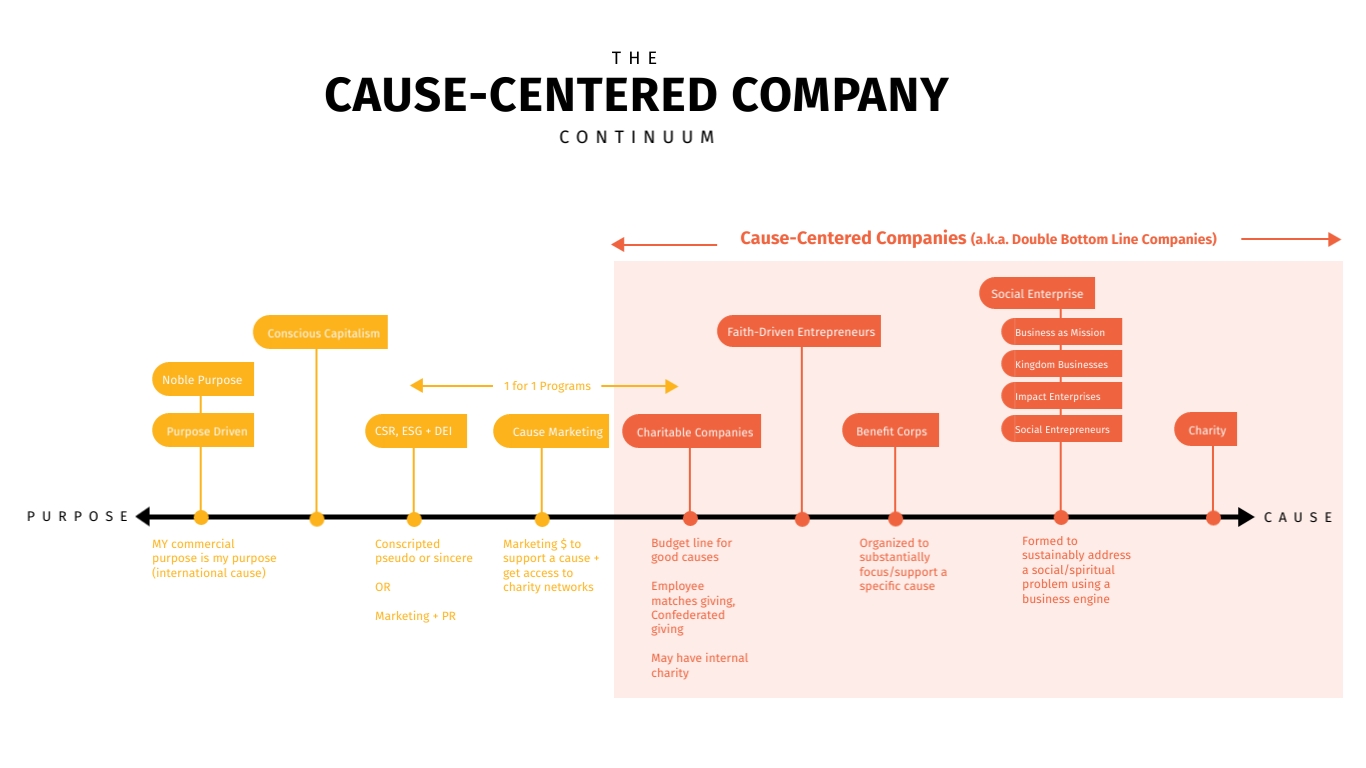 There's a continuum of the ways that companies engage with making a difference or creating impact. And so, uh, in looking at what these are all called, there's tons of different [00:01:00] languages being used. It's a kind of a confusing, uh, pile of spaghetti.

Big reason for doing business. So for example, I'm in healthcare. I, I help people feel better and stay well and live a long time. That's my purpose. There's even a book called noble purpose, which talks about the fact that, you know, companies that are doing something of value, have a significant and important purpose.

So that's, that's purpose driven and purpose driven, um, is really everywhere in the marketplace. Um, and it's, and you can, you can see these purpose statements. Some of them are. Frankly, all that [00:02:00] different than what they used to have with vision, vision value statements, and they describe their commercial activity and why it's important.

Um, so for some companies, their purpose might be what they commercially do. That could be what they're really in business for. Um, and then if we go to the right, we have companies that are embracing and by the way, these are not mutually exclusive. You could be in more than one category. You could be a blend of these categories.

Uh, we go to the right a little bit. We have, uh, CS. Programs corporate social responsibility. This is primarily a PR activity in which we adopt a social activity or social impact. And we use that as part of our public relations that say, yes, we're doing good. So CSR has moved into the realm of you must do it.

Um, and so now part of the corporate kind of ethos of you, you have to have a socially responsible. Element to your company. And so, um, the challenge we have with this is that that can be either [00:03:00] pseudo cause for you or it, um, it can be conscripted. Like you could be forced into it. and we saw a lot of that during 2020.

Um, we saw a lot of that with BLM. People were being conscripted into this social cause whether they believed in it or not. And there's lots of other examples of this conscription into social responsibility. Um, and it's essentially caving to social pressure, unfortunately, but some, for some people it's actually sincere and they're doing this cuz they actually believe in it.

Others are doing it cuz they're being forced into it and it can be primarily a marketing or PR activity. um, so in the category of CSR corporate social responsibility, we also have, um, ESG, which we'll talk about more in detail. Um, and it's, and it's related cousin DEI. We'll talk about what those mean in a couple of minutes, but just this, this part of the continuum is basically where you've adopted social responsibility as part of your company's purpose and you make it [00:04:00] public.

Um, somewhere in between the two, there's a group called that does conscious capitalism. That's kind of, uh, bridging the gap between these two. Um, we also have some of these one for one programs, Toms shoes, be an example. Um, is it CSR or the next category moving to the right more toward cause uh, or charity is cause market.

So, this is where we, where a marketing company or a corporation pays money to a cause they become an official cause partner, and then they will put their emblem. You've seen these pink ribbons on beer cans, you know, everywhere. Um, That's cause marketing. So the marketing theory is we're gonna pay money.

We're gonna support the charity with some cash flow, but we, as a company are gonna access to their loyal followers as, as part of their cause. Um, so that's what cause marketing is. So the one for one programs kind of fit either in the CSR or the cause. Um, Program. They could actually go over into the next category as well, which is [00:05:00] charitable companies.

So we're going from the left where it's just purpose driven toward the right, which is more cause focused. So there's charitable companies. These are companies that have kind of fixed BI, uh, enlarged budget lines that they're investing in good causes. This is not token giving. Um, this is something more than just token giving and they might have employee match giving.

They might do Confederated giving. Um, they might even have an internal charity. Uh, there's one that I was looking at recently. That actually formed their own charity. And they might do that because they wanna be able to control where the dollars are going, or they might wanna just be efficient in making sure that the money's being treated properly or maybe there wasn't a charity doing what they wanted to do.

So these are charitable companies that really are generous, and this is part of their character as a company, their culture. And they do give. If we go even farther to the right, we have what are called benefit corporations. These could be B Corps. They could be, uh, called that they could be called LC three S they could also be called [00:06:00] in Virginia.

In fact, story collaborative is a benefit corporation in the state of Virginia. Um, we are, uh, and these. Corporations or companies are organized for the purpose of intentionally supporting a specific cause. But their main business is not the cause. So, uh, they are supporting something and they're making a difference and it's built into their actual structure, uh, benefit corporations and B CORs were actually invented originally.

So. Stockholders couldn't Sue the management when they took some of the money that would've gone to maybe dividends and invested it back into causes. So, um, but these are companies that are focused on, uh, bringing change the next level over as we move even closer to a cause focus or charity focus is social enterprise.

and these are companies they weren't formed. So an example of a, a, a generous company at least would be window world. We, uh, Chad and I saw, uh, some charitable paratroops land in the middle of a baseball field [00:07:00] and they were flying. Uh, one of their flags was a window world flag. Right. They're being supported by window world.

So a social enterprise is formed to sustainably address a specific social or a spiritual problem, but they're doing that using a business. So that's, and that would include businesses, mission, uh, kingdom, businesses, impact enterprises and social enterprise. Um, and of course these things mix get mixed up.

And then the last section to the right, we go all the way to the right. We have straight up charity where we take people's donated dollars and our fee generated dollars and we put them into. Doing good. So, so that's the sorting that we've been doing and we, I hope we've got it. O [00:08:00] got it. Right. Uh, we're still working on it and we'd love to hear people's feedback.

If you think we've got the categories slightly messed up.